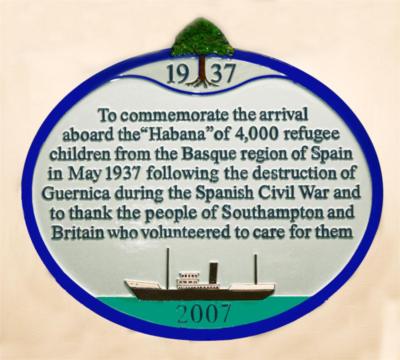 A major endeavour with which we have become involved is the erection of Blue Plaques to mark the sites of previous colonies and to acknowledge the care and support of the local people.

It involves contacting and liaising with local councils, historical societies, and local papers. It often unearths surprising new facts, details, memories and occasionally a new niño or niña is found, so these can be a very emotional event all round!

These popular events are always well supported locally, and, together with the publicity they produce, have become a valuable way of educating the public and attracting interest in our Association.

The plaque outside the Southampton City Library commemorates the 70th Anniversary of the niños' arrival at Southampton.

The plaque erected in Montrose commemorates the only Basque children's colony in Scotland.

Photos of plaques in our gallery

Click on a thumbnail above to view a larger image, or view the whole set in our gallery