All prices include 2nd class postage and packing to UK unless otherwise stated.

For all UK orders and enquiries please contact Simon Martinez at sales@basquechildren.org

This book is specifically a history of the Spanish Civil War centred in an interesting industrial area of the Basque Country and beyond. It is the background of many of the nearly 4,000 children who came to England as refugees in May 1937. The complex social, political and traumatic situation these children came from is well explained and can throw a light on how these children dealt with the challenge of a completely different life in England.

Memories of the Spanish community in London including those of two of the Niños Vascos Cai and Feliciana Martínez.

From Bilbao to Britain

A brief overview of the history of why and how the children were evacuated
to Britain, together with some information about the colonies.

First-person accounts by the niños de la guerra of their journey
and stay in Britain.

Only for Three Months: the Basque refugee children in exile (2nd edition)

by Adrian Bell
276 pages - illustrated with line drawings by Caireles Martínez and photographs
£11.50

Covers the political background of events both leading up to the evacuation and during the children's stay. Includes interviews with niños who stayed and their British helpers.

It is also available throughout Spain in bookshops as Solo Serán Tres Meses.

First of two DVDs of the 70th Commemoration of the arrival of the Basque children to Britain, held at Solent University, Southampton in 2007.

Edited coverage of the whole event, no added commentary.

Second of two DVDs of the 70th Commemoration of the arrival of the Basque children to Britain, held at Solent University, Southampton in 2007.

Covering the traditional Basque dances performed at the event.

Songs of the Basque Children

Songs from the original book used by the niños de la guerra, performed
by children from the Cañada Blanch school, London (13 tracks sung in Spanish)
and a reissue of an original 1938 Parlaphone recording (8 tracks sung in Basque).

Songs of the Spanish Civil War

Written and performed by this duo composed of musician
Roberto García (son of niño Fausto García) and Paul McNamara,
the EP includes their song about the story of the niños leaving Bilbao.

Written and performed by this duo composed of musician
Roberto García (son of niño Fausto García) and Paul McNamara,
the EP includes their song about the story of the niños leaving Bilbao.

[Pound coin for size comparison only]

This is a reproduction of the badge for the SS Habana / Vapor Habana.

The passengers on the liner would have had a badge as a memento of their voyage. The ship was leased from its owners by the Basque Government and made trips to Britain, France and Russia taking children to safety and, for those who did not return to Spain, exile.

NOTE: The Children who came to Britain had a hexagonal card badge not this fine enamel one.

Pack of six cards with pictures of the Basque Children in the UK:
"human chain"; "passengers"; "habana".

Cards come with envelopes and are A5 folded size. A pack of 6 cards contains two of each of the three pictures.

The cards are from pictures created by the artist by etching and use of aquatint.

The pictures were displayed by the artist at the Fundacíon BilbaoArte Fundaziao and the Castlefield Gallery, Manchester.

In partnership with the artist Maite Pinto the BCA'37UK is delighted to bring you the original art which won the biennial prize at the Manchester School of Art for best young artist 2018. The pictures show scenes from the lives of the Basque Children in the UK. The pictures use etching and aquatint to create very moving images. 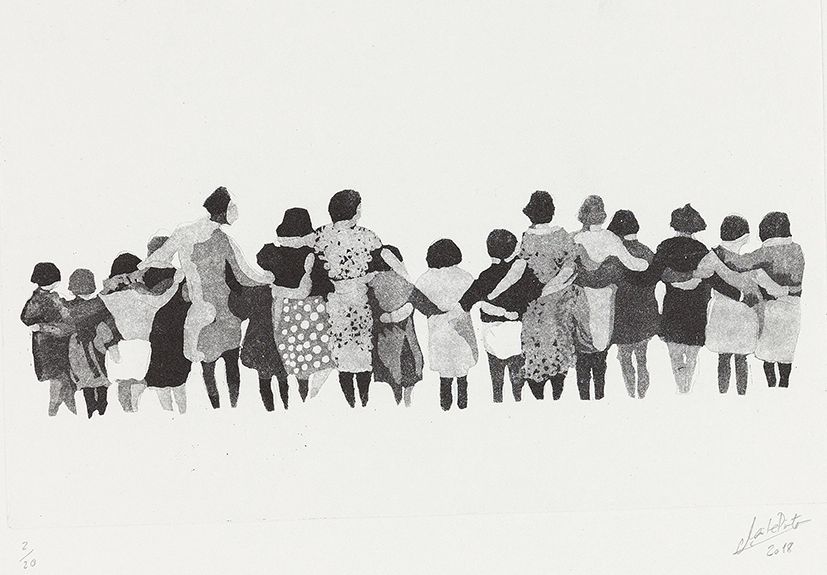 The first picture available will come mounted but unframed and is titled "human chain" It shows a group of children on the beach at Worthing. One can feel their sense of loss looking out to sea but also their hope and togetherness. We will advertise when further pictures are available from Maite. 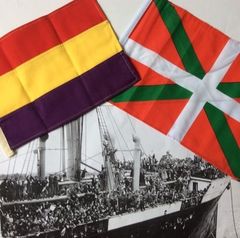 A replica of the flag brought to Britain by one of the Niños.

The Ikurrina - flag of the Basque Country